The “Hipster of History”

Miller Keeps it Current while Investigating the Unknown. 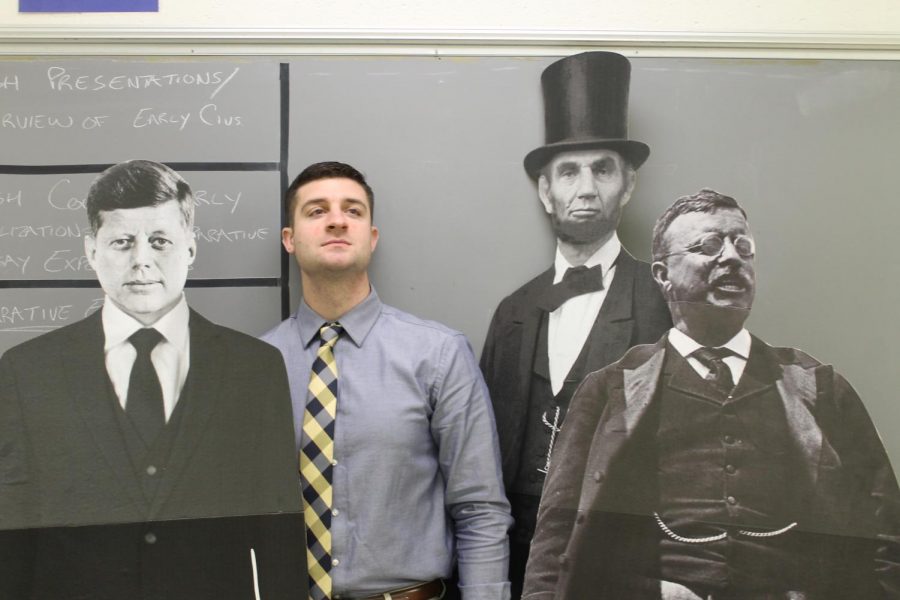 Mr. Miller stands proudly with his favorite president, TR, along with some other great leaders of our country. Miller said Roosevelt is his favorite president because of how he influenced the people of the United States. "The way he could motivate people is definitely inspiring to me," he said. Photo by Kenneth Foran

The self-proclaimed “hipster of history” is back at it again for his third year as a History teacher here at SRHS. This year, Mr. Miller is teaching General Civics and Honors World History 10. He said he enjoys teaching his civics class more mainly because, “it’s controversial; I don’t have to do much motivating of my students.” However he still likes teaching his honors class because “the students are much more willing to go deeper…they are much more prone to investigating things on their own.”

Miller had dreams of being a teacher ever since he was a kid. “I always wanted to be a teacher,” he explained, “my aunt was a high school social studies teacher and I think that she is pretty cool, so that’s what originally drew me to it.”  He also attributes his love for teaching to “being kind of a dork in high school,” and “not minding going to school and doing assignments.”  Miller also expressed that he was drawn to history because of “the controversial nature of it,” and the “abstract thinking component” that goes along with the subject.

One of Miller’s staples of his teaching is that he goes where no history teacher dares to go. “I call myself a ‘Hipster of History’ because I like to focus on the lesser known…those things that students would otherwise graduate without knowing.” Seniors may remember that he decided he did not want to teach Greece and Rome in his World History class because they were very well known parts of history. While he has put Greece and Rome back into his teaching curriculum, he nonetheless continues to drop knowledge bombs containing overlooked parts of history into the minds of his students.

While diving into the depths of the unknown, Miller also likes to “keep it current” in both of his classes. He explained that every Friday in Civics he has the students pick a current event to talk about that they can relate back to the course. “We don’t discriminate any topics at all,” he said, “as long as we can relate it back and talk about the constitutionality of it or how it relates to our public opinion.” Miller also said he does the same for his World class, but has the students talk about topics that are relevant on a world level.

Although he is quite the icon himself, the “Hipster of History” says that he is inspired by former president Theodore Roosevelt to be the man he is. This should come as no surprise to anyone who walks into his room, as he has a cardboard cutout of the legendary figure by his desk. When asked why TR inspires him, Miller said “I think just, rhetorically, the way that he spoke to people, the way that he could motivate people, is definitely inspiring to me.” Miller also mentioned that Roosevelt’s “Man in the Arena” speech is one that he holds near and dear to his heart.

To keep up to date on what Slippery Rock’s favorite hipster is up to, check out Mr. Miller in his room, C-7.