Marching Together: The 2019 Rocket Marching Band 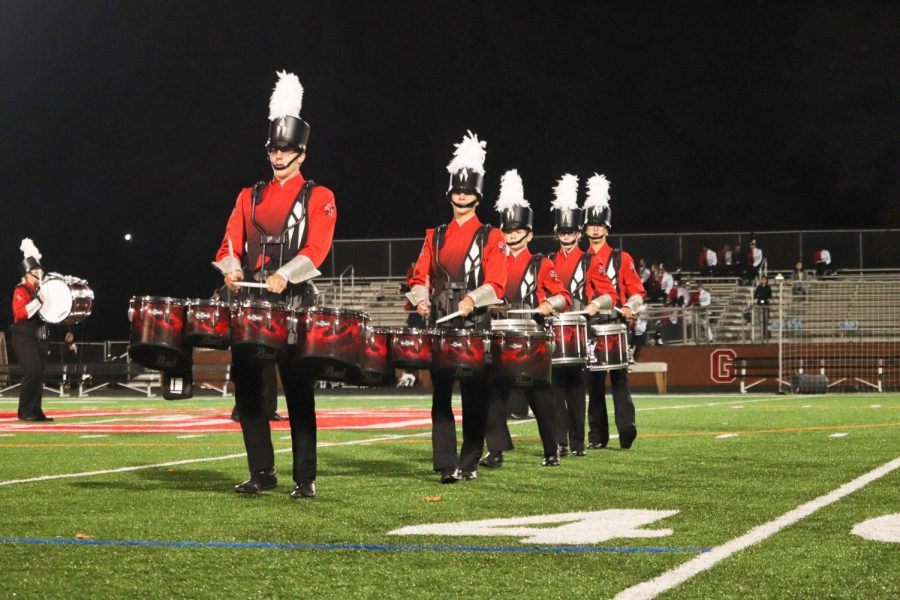 Members of the drumline, including senior Greg Pritts and junior Christian Shaffer, play the tenors during the Grove City College Marching Band Invitational on October 12.

We all enjoy watching football, but who doesn’t enjoy watching the marching band? Between halftime or pregame shows, and even playing in the stands, there is plenty going on with the band. They even go to their own events, such as parades and band competitions.
The band shows team spirit and support for the football team. The band even wears Slippery Rock colored uniforms and they work together to perform at their absolute best to help share the team spirit for the team and the school.
They go to many amazing places throughout the year for parades and band trips, such as Kennywood, King’s Island, New York, and even Disney World just to compete and represent our school.
Sophomore Eric Colosimo states, “My favorite memory from band is my very first year doing my very first few performances and parades and the rush from accomplishing it.” Colosimo plays the symbols for drumline. He has been in percussion for 6 years. Colosimo adds, “I always wanted to be in percussion because from a young age I was very good at hitting things like buckets before I got a snare drum.”
Another marching band member, junior Ryan Hartz reports, “The greatest thing about band is getting to know other people who are equally passionate about music.”

Hartz has played clarinet for 7 years and has been in marching band for 4 years. Colosimo and Hartz are both very passionate about music, and marching band.
Marching band students get to go to and perform at football games and several other events other than just football games.
In marching band, there are a very broad variety of instruments to try out. Instruments in the percussion include snare drums and bass drums, brass instruments include trombones and tubas, and woodwinds include saxophones and flutes. There are also people who play in the pit; they play instruments such as the vibraphone, cowbell, the gong, and marimba.
In band, there are specific leadership roles as well. Section leaders lead a specific section of instruments and make sure they have the right music and practice together.

Then, there are the drum majors. They lead the entirety of the band. They conduct music both on the field and off the field.
Between football games and parades the marching band is leaving its musical mark everywhere they play.